The TOE is also referred to as JCOP 4 P71. The JCOP 4 Operating System (JCOP4 OS) consists of the software stack without the Crypto Library (Crypto Lib) and without the Micro Controller Firmware (MC FW). The TOE uses one or more communication interfaces to communicate with its environment.

The complete TOE is depicted in Figure 1.1. The elements are described in more detail in Section 1.3. 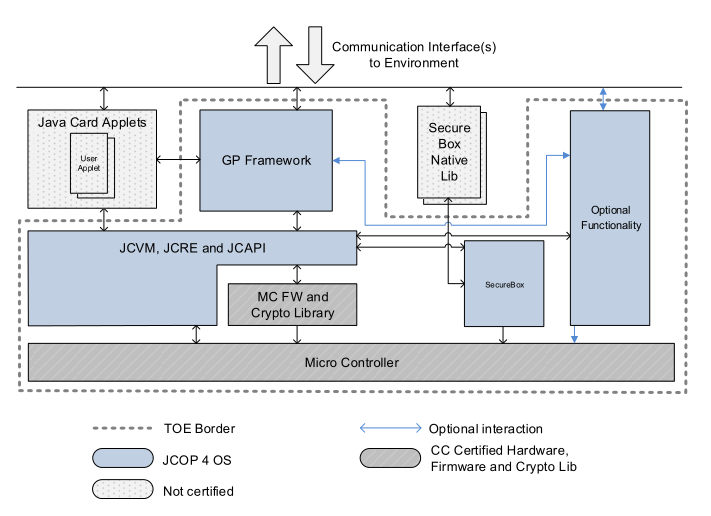 Figure 1.1 shows the components of the TOE. The TOE is a composite product on top of CC certified Hardware, Firmware and Crypto Library. Part of the TOE are the JCVM, JCRE, JCAPI and the GP Framework. Also included is optional functionality and the Secure Box mechanism. The Secure Box Native Librarys provide native functions for untrusted third parties and are not part of the TOE.

The figure shows Java Card applets which are small programs in Java language that can be executed by the TOE, but are not part of the TOE.

1.2.1 Usage and Major Security Features of the TOE

The usage of the TOE is focused on security critical applications in small form factors. One main usage scenario is the use of so called smart cards. Examples of such cards are banking cards or electronic drivers’ licenses. The TOE can also be used in an electronic passport. Another usage scenario is device authentication, where the TOE can be used to prove the authenticity or originality of a device like an accessory for a gaming console.

The TOE provides a variety of security features. The hardware of the Micro Controller already protects against logical and physical attacks by applying various sensors to detect manipulations and by processing data in ways which protect against leakage of data by side channel analysis. With the software stack the TOE provides many cryptographic primitives for encryption and decryption of data but also for signing and signature verification. Also the software stack contains security features to protect against attacks.

The following list contains the features of this TOE:

1.Data Encryption Standard with 3 keys (3DES) for en-/decryption (CBC and ECB) and MAC generation and verification (Retail-MAC, CMAC and CBC-MAC).

8.Diffie-Hellman with ECDH and modular exponentiation1.

10.Following cryptographic algorithms are part of the TOE but without claims for security functional re-quirements:

(f)Elliptic curve cryptography based on Edwards and Montgomery curves1 2,

1.Executing the Java byte codes which are generated from the Java compiler when Java source code is compiled.

2.Managing memory allocation of code and data of applets.

9.Verification of signatures of signed applets.

10.Verification of signatures for commands.

14.Post-issuance installation and deletion of applets and packages.

1.Proprietary secure messaging accelerator interface for applets which are used for electronic passport as defined by ICAO or electronic driver license1.

The TOE is a Java Card with a GP Framework. It can be used to load and execute off-card verified Java Card applets.

Three groups of users shall be distinguished here.

The first group is the end-users group, which uses the TOE with one or more loaded applets in the final form factor like a banking card or an electronic passport. These users only require a communication device to be able to communicate with the TOE. The communication protocol of the TOE is standardized in either ISO7816 [31] (T=1, T=0), ISO14443 [10] (T=CL), or UM10204 [28] (I2C Slave, only for Configuration Secure Authentication).

The second group of users are administrators of cards. They want to configure the card by using the Configu-ration Module, to install additional applets and to configure and personalise these applets. These users require the same equipment as end-users.

The third group of users wants to develop Java Card applets and execute them on the TOE. These applet devel-opers need in addition to the communication device a set of tools for the development of applets. This set of toolscan be obtained from the TOE vendor and comprises elements such as PC development environment, byte code verifier, compiler, linker and debugger.

Access to all memory types is controlled by a Memory Management Unit (MMU) which allows to separate and restrict access to parts of the memory.

The Crypto Library provides implementations for symmetric and asymmetric cryptographic operations, hashing, the generation of hybrid deterministic and hybrid physical random numbers and further tools like secure copy and compare. Some of the cryptographic algorithms offered by the Crypto Lib are not certified, see 1.3.1.4.

JCOP 4 OS consists of JCVM, JCRE, JCAPI and GP framework. It is implemented according to the Java Card Specification and GlobalPlatform version listed below. Additionally it consists of a proprietary API, which is de-scribed in the UGM [14], [15].

The JCOP 4 OS component can be identified by using the IDENTIFY APDU command (see UGM [14], [15]). This command returns the card identification data, which includes a Platform ID, a Patch ID and other information that allows to identify the content in ROM, FLASH and loaded patches (if any). The Platform ID is a data string that allows to identify the JCOP 4 OS component.

All three versions are covered by this Security Target, they can be differentiated by the response data of the IDENTIFY command (see UGM [14], [15]).

All Secure Box Native Libraries are not not part of the TOE. No security functional requirements are claimed on KoreanSEED, AES CCM, HMAC, HKDF, ECDAA, elliptic curve cryptography based on Edwards and Montgomery curvesand FIPS self-tests, they are TSF non-interfering.

Some dedicated functionality of the TOE can be removed in order to free up memory.

•Accelerator for integrated mapping of the PACE protocol,

•ECDAA [27] and elliptic curve cryptography based on Edwards and Montgomery curves. This functionality is available only in Configuration Secure Authentication of the TOE.

•I2C slave protocol and T = 1 over I2C. This functionality is available only in Configuration Secure Authenti-cation of the TOE. 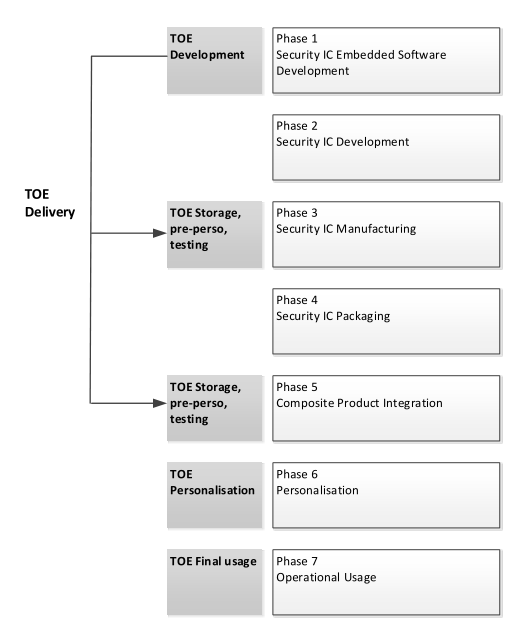 The evaluation process is limited to phases 1 to 5. User Applet development is outside the scope of this evalua-tion. Applets can be loaded into FLASH in phases 3, 4, 5, and 6. Applet loading in phase 7 is also allowed. This means post-issuance loading of applets can be done for a certified TOE.

The Configuration Module is loaded into FLASH and has special privileges to personalize and configure the TOE. Before life cycle Phase 7 "Operational Use" the Configuration Module is deleted and hence it is ensured that its functionality cannot be used after wards. It is possible to load patch code into FLASH in phases 3, 4, 5, and 6. The certification is only valid for the ROM code having the Platform Identifiers and the Patch IDs (if applicable) as stated in Table 1.7.

The delivery process from NXP to their customers (to phase 4 or phase 5 of the life cycle) guarantees, that the customer is aware of the exact versions of the different parts of the TOE as outlined above.

TOE documentation is delivered in electronic form (encrypted according to defined mailing procedures).

Note: Phases 1 to 3 are under the TOE developer scope of control. Therefore, the objectives for the environment related to phase 1 to 3 are covered by Assurance measures, which are materialized by documents and procedures evaluated through the TOE evaluation process.

During phases 4 to 7 the TOE is no more under the developer control. In this environment, the TOE protects itself with its own Security functions. But some additional usage procedures must also be followed in order to ensure that the TOE is correctly and securely handled, and not damaged or comprised. This ST assumes (A.USE_ DIAG, A.USE_KEYS)that users handle securely the TOE and related Objectives for the environment are defined(OE.USE_DIAG, OE.USE_KEYS).

The delivery comprises the following items:

1The TOE is delivered as wafer or module. The TOE can be collected at NXP site or is being shipped to the customer. See [14], [15] for details.

2included in the Micro Controller

the TOE which are unique amongst all JCOP variants at NXP.

A number of package types are supported for this TOE. All package types, which are covered by the certification of the used hardware (see [20]), are also allowed to be used in combination with each product of this TOE.

The package types do not influence the security functionality of the TOE. They only define which pads are con-nected in the package and for what purpose and in which environment the chip can be used. Note that the security of the TOE is not dependent on which pad is connected or not - the connections just define how the product can be used. If the TOE is delivered as wafer the customer can choose the connection on his own.