2020-07-06 14:19:54 M&W SmartCard 23
The debate between RFID and smart cards technology is an ongoing one. There is no clear definition that describes RFID and smart cards, and at times these two terms are used interchangeably, due to lack of awareness, resulting in confusion between the differences. Confusion is especially strong between contactless smart cards and RFID. The key issue that has given rise to this debate is the contact less interface and that too an RF (radio frequency) one. Both contactless smart cards and RFID use radio frequencies for communicating between the card and reader. The applications for which RF is used can be different for RFID and smartcards. RFID is mainly meant for applications within the supply chain, for track and trace. Contactless smart cards on the other hand are mainly meant for payments/banking, mass transit, government and ID, and access control. This article aims at clearing the confusion between the two technology definitions. The following chart depicts the various applications of contact less smart cards and RFID, along with their level of information security. 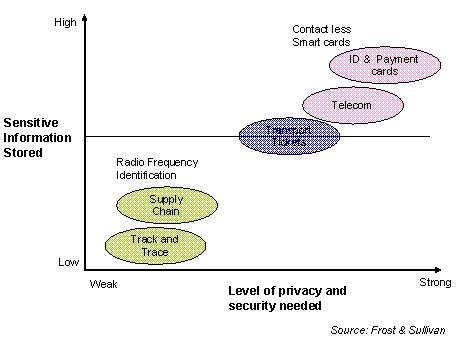 RFID and smart cards both can be used in transit applications and most of the time they are used together to provide increased convenience to end users. An example of this would be the "Touch n go" cards in Malaysia used on toll ways. The Touch n Go card is a contactless smart card, but this card can be purchased with an additional RFID transponder (where the smart card will be inserted) so that the toll booth reader can read the cards from a greater distance than the 10cm limit restricted by smart card standards. Without the additional RFID transponder, the contactless Touch n Go smart cards can still be used, which means that the driver need to screen down their windshield to tap the card on the reader, instead of just driving through while the RFID transponder will be detected by the reader above the toll booths at a greater distance.

It includes tags, Antenna or coil Electronics programmed with unique information, reader and software. The RFID ecosystem comprises of players offering a wide range of products and services. The Integrated circuits group comprises of IC designers, antenna and IC manufacturers. These ICs are used in the development of RFID hardware equipments which comprises of tags (that can be active or passive), in addition to readers and printers.

The software and middleware in the equipment is integrated with the back-end systems by the system integrators who also act as the distributors and value added resellers. In addition, there are several companies that provide training and consulting services. Some companies focus on one key aspect while others provide services across the value chain.

RFID technology operates at four different frequencies that have different characteristics. The table below lists the various RFID frequencies, with their capabilities and applications. 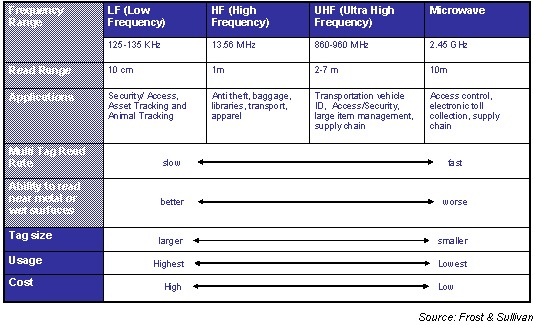 The key RFID standards used are:

Contactless Smart Cards are cards that contain an IC (integrated chip) that complies with ISO 14443 (mostly type A) or better known as Mifare. ISO 14443 sets communication standards and transmission protocols between card and reader to create interoperability for contactless smart card products. Read/write range of devices is usually up to 4 inches/10cm. (Note: this figure is generally accepted but it is not stated in the standard.) End users these days often require full compatibility in both the readers and in the cards. Cards are intended to communicate with the reader antenna at a frequency of 13.56 MHz. Two main communication protocols are supported under the ISO 14443 standard series –Type A (MiFare),Type B and Type C (Sony -FeliCa IC-mostly in Japan). ISO 14443A is the most widely used contactless smart card standard in the world, mainly for transport applications.

In this technology, readers are sometimes technically referred to as Proximity Coupling Device (PCD) and cards sometimes called Proximity Integrated Circuit Cards or (PICCs). The confusion between RFID and contactless smart card arises when the terminology varies across the industry where the word ‘proximity card’ sometimes refers to both contactless smart card and proximity cards with no multi-application capability, while ‘vicinity cards’ are sometimes used to refer to the proximity cards mentioned in this study.

Contactless smart cards have been particularly popular in recent years because of its security and multi-application aspect. This means that one card can be utilized across transit, payment and access (combined into one card). Transit (sometimes combined with payment) is currently the most popular application using contactless smart cards. The key applications aside from transit and door access are currently the growth areas such as government ID, payment/banking, logical access control and e-passport (which is technically not a card, but uses the same contactless IC chip). Contactless smart cards are generally used for applications like these, where a higher level of security and privacy is necessary to protect the information stored by the card.

Some of the key differences between RFID and smart cards is that where RFID can read up to longer read distances, contactless smart cards have the capability to read up to 4 inches only. RFID can operate at 125 KHz,13.56 MHz, 850-950 MHz and 2.4- 5.8 GHz, with memory up to 2 KB.

Contactless smart cards on the other hand operate at a frequency of 13.56 MHz, with higher memory capacity of typically 8K to 64K. The higher security capabilities and memory capacity of smart cards renders them suitable for applications such as e-passports, payment cards, and identification. Such applications are also better positioned to absorb the higher cost of smartcards as compared to passive RFID tags. Passive RFID is primarily touted for track and trace applications especially within supply chains. As a general rule, while RFID is used in applications that identify and track objects, contactless smart cards are used in applications that identify objects/persons as well store financial/personal information.

There are certain limitations of the RFID technology, due to which smart cards are considered more secure. Firstly, in case of RFID there are certain privacy issues. Since it is an identification technology and that too contactless, there are chances that a nearby reader can read the tag and hence come to know the details of the products, without the holder’s knowledge. Whereas in the case of smart cards the information can be encrypted so that only an authorized reader can access the information.

One of the sources of confusion arising between the two technologies occur because proximity cards (which are RFID cards using 13.56 MHz) and contactless smart cards are both applicable in physical access control. Both cards use 13.56 MHz and can be used for door access to buildings and restricted areas, but proximity cards can allow a read distance of up to 1.5 meters, while contactless smart cards have a read limit of 10 centimeters.

To conclude we discuss the standards that are most widely accepted. Proximity - ISO 15693 is a standard for ‘vicinity’ or proximity cards, which can be read from a greater distance as compared to contactless smart cards. This standard was create to allow a maximum read distance of 1-1.5 metre. An example of this being the Radio Identification tags (RFID) used to collect toll electronically these days. As the vicinity cards have to operate at a greater distance, the necessary magnetic field is less (0.15 to 5 A/m) than that for a proximity card (1,5 to 7,5 A/m). Contactless Smart Cards-The majority of contactless smart cards used in access control comply with ISO 14443 (mostly type A). Proximity cards on the other hand, often have longer read distance than 10cm, hence complying with ISO 15693 instead. However, there are some proximity card/readers that comply with both standards 14443 and 15693 for the purpose of more secure cards that can communicate at a distance further 4 inches.

The following table highlights certain differences between RFID and Smart card, from the technology point of view:

Given that both technologies uses contact less interface, RFIDs and smart cards are expected to compete on security grounds. However, this possibility is unlikely for a long time, because the current market potential for both the technologies in their respective application segments is immense.