The self-containment of Smart Card makes them resistant to attack as they do not need to depend upon potentially vulnerable external resources. Because of this, Smart Cards are often used in applications which require strong security protection and authentication.

Technology and security are strongly related. Crackers find sophisticated ways to get at supposedly secure data on cards => Manufacturers have to come up with more sophisticated locks and keys on cards => Crackers come up with better techniques to bypass these ... thus forming an infinite improvement loop, with both sides driving each other to use and invent better technology.

There are four different aspects of the Smart Card security:

Communication with the outside world

A Smart Card and a Card Accepting Device (CAD) communicate via means of small data packets called APDUs (Application Protocol Data Units). The following characteristics of this interaction make it harder for third parties to attack the system successfully:

However, every external device communicating with the card makes it more vulnerable to attack via the communication link.

The Smart Card and the CAD use an mutual active authentication protocol to identify each other. The card generates a random number and sends it to the CAD, which encrypt the number with a shared encryption key before returning it to the card. The card then compares the returned result with its own encryption. The pair may then perform the operation in reverse.

Once communication is established, each message between the pair is verified through a message authentication code. This is a number that is calculated based on the data itself, an encryption key, and a random number. If data has been altered (for any reason, including transmission errors) message must be retransmitted. Alternatively, if the chip has sufficient memory and processing power, the data can be verified through a digital signature.

The most common encryption methods are symmetric DES (Data Encryption Standard), 3DES (triple DES) and public key RSA (Rivest-Shamir-Adleman's algorithm), allowing up 56, 168, and 1024 bit long keys, respectively. Unfortunately, these keys are not unbreakable, as explained by Ross Anderson and Markus Kuhn in their book `Design Principles for Tamper-Resistant Smart Card Processors'. The pair managed to crack the Dallas DS5002FP Secure Microcontroller, described at the time by one European signals intelligence agency as the most secure processor available on general sale. They used brute force methods on a PC enhanced with a couple of hundred dollars of extra hardware!

All data and passwords on a card are stored in the EEPROM and can be erased or modified by an unusual voltage supply. Therefore some security processors implemented sensors for environmental changes. However, since it is difficult to find the right level of sensitivity and there is a voltage fluctuation when the power is supplied to the card, this method is not widely used. Other successful attacks methods include heating the controller to a high temperature or focusing the UV light on the EEPROM, thus removing the security lock. Invasive physical attacks are the most destructive when the card is cut and processor removed. Then the layout of the chip can be reverse engineered. 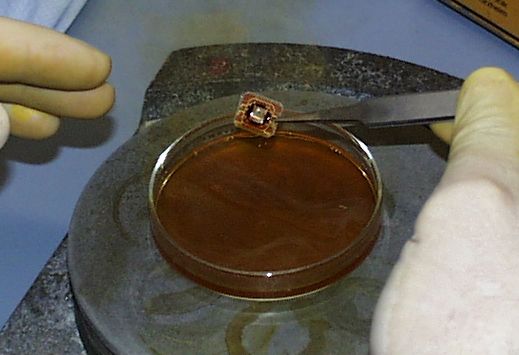 Differential Power Analysis (DPA), is a statistical attack on a cryptographic algorithm which compares an hypothesis with a measured outcome and is often capable of extracting an encryption key from a smart card or other computing device. Simple Power Analysis (SPA), the direct analysis of the recorded power data to determine actions and data, is also useful.

Several technologies have been developed to protect Smart Cards. These are technologies of STMicroelectronics against SPA/DPA attacks:

Data on Smart Cards is organized into a tree hierarchy. This has one master file (MF or root) which contains several elementary files (EF) and several dedicated files (DF). DFs and MF correspond to directories and EFs correspond to files, analogous to the hierarchy in any common OS for PCs. However, these two hierarchies differ in that DFs can also contain data. DF's, EF's and MF's header contains security attributes resembling user rights associated with a file/directory in a common OS. Any application can traverse the file tree, but it can only move to a node if it has the appropriate rights.

There are five basic levels of access rights to a file (both DF and EF). Some OS provide further levels. Basic levels can be categorized, increasingly in security, as follows:

However, presenting a CHV2 does not suffice to access a file requiring CHV1. CHV1 and CHV2 correspond to the two security PINs stored in the card: one is a common user identification PIN and the other is a specific unblocking PIN pre-stored in the card.

The PINs are stored in separate elementary files, EFCHV1 and EFCHV2 for example. The OS blocks the card after a wrong PIN is entered several consecutive times. The number of times is fixed and depends on the OS. Once blocked, the card can only be unblocked with a specific unblocking PIN stored in the card. The unblocking PIN can become blocked in the same way. If this happens, card is said to be in irreversible blockage and may have to be scrapped for security reasons.

Software producers also contribute to the Smart Card security - they should provide their products with properly encrypted data and transfers. To help them achieve this goal, hardware-based or OS-based instructions and libraries supporting advanced cryptographic algorithms have been developed.

Most attacks today are classified as class 3 attacks, which means that either the costs associated to break the system are far more than the cost of the system itself, or that the cracker has to spend several or hundred years of computing power to break into a single transaction. Technology is developing faster than cracker methods. Therefore, each new generation of technology usually prevents attacks that the previous generation was vulnerable to.